Arizona State University’s Earth and Space Exploration (ESE) Day is Saturday, November 13th from 10:00 AM – 1:00 PM Pacific Time. This virtual event is so amazing, that it has its very own Passport to the Stars. Participate in three or more ESE Day presentations and enter to win cool prizes! Learn more about the Passport to the stars and your chance to win!

We invite you to get to know Webb and share in the excitement through Arizona State University’s Earth and Space Exploration Day. Register for this FREE Event here.

Attend any 3 ESE Day Webb presentations and submit your passport to win prizes. 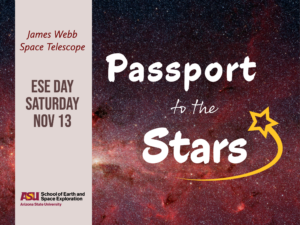 Here’s how it works:

1. Attend ESE Day and listen for Webb-related presentations.
2. Scan the QR code for each presentation with a smartphone camera.
3. Record the code word in your passport or on a piece of paper.
4. When you have at least 3 code words, scan the QR code on the back of the passport (also below) and complete the form with your code words no later than 11/30/2021 .
5. We’ll send you a special Webb poster and a NASA mystery prize.

Prizes will only be mailed to U.S. addresses.
*This opportunity is open to travelers in grades K-12

Submit your passport by scanning this code.

The James Webb Space Telescope is the largest, most powerful and complex space science telescope ever built. It is targeted to launch into space from Kourou, French Guiana, on Dec. 18.

Webb will serve as the premier deep space observatory for the next decade, exploring every phase of cosmic history — from within our solar system to the most distant observable galaxies in the early universe, and everything in between. 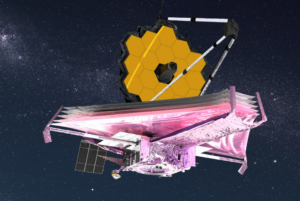 Arizona State University Regents Professor Rogier Windhorst of the School of Earth and Space Exploration is a co-investigator and interdisciplinary scientist for Webb. He is joined by research scientist Rolf Jansen and assistant research scientist Seth Cohen, along with a team of ASU undergraduate and graduate students working on this mission.

In honor of this historic launch and to highlight ASU’s involvement in this mission, the university is joining nearly 500 event hosts across the nation that were selected by NASA to provide a series of events celebrating Webb and highlighting the scientists behind the telescope.

NASA’s Science Activation (SciAct) program, a community-based approach to connect NASA science with learners of all ages, is leading the national efforts to celebrate the launch of Webb and to showcase the mission.

“We are excited about a new approach where nearly 500 communities hear firsthand the ‘behind the scenes’ story about this incredible mission from science experts,” said Kristen Erickson, director of science engagement and partnerships at NASA headquarters in Washington, D.C. “Partnering with these communities at the beginning of Webb’s journey will also provide insights about how we can co-create opportunities together for Arizona and the nation.”

To encourage participation in Webb events across Arizona, and in conjunction with four of ASU’s SciAct projects, including ASU’s School of Earth and Space Exploration SCoPE and Infiniscope projects, the school has created a Webb calendar of events with 15 NASA-selected hosts across the state.  Continue reading…

More powerful Webb telescope will provide a look back in time

In a little more than two months, humankind’s most powerful eye on the universe will launch, literally giving astronomers the ability to look back in time.

The James Webb Space Telescope is an orbiting infrared observatory with longer wavelength coverage and greatly improved sensitivity. The longer wavelengths enable Webb to look much closer to the beginning of time and to hunt for the unobserved formation of the first galaxies, as well as to look inside dust clouds where stars and planetary systems are forming today.

Thursday night a panel of Arizona State University scientists and students reviewed the telescope, which will launch from French Guiana on Dec. 18.

The panel was the first in a lineup of events ASU has been selected to host in honor of the telescope’s launch.

“Our universe is filled with galaxies,” said senior Liam Nolan, an undergraduate student who researches under the direction of Regents Professor Rogier Windhorst in the School of Earth and Space Exploration.

Nolan displayed the famous Hubble Ultra Deep Field photo, a shot of 10,000 galaxies that look like Lucky Charms against a star field. Thirty-one years after Hubble’s launch, the telescope is now about 12 years past its design life. The primary Webb mirror is 2.5 times bigger than Hubble’s and will see longer wavelengths. Continue reading…

Miss an event you really wanted to attend? We might have it archived for you here! Click the Read More button below to see the full list of archived events. Don’t forget to check back here periodically to catch up on all the events that happened over the past week.

Passport to the Stars: Webb Across Arizona

Attend three or more in-person or virtual Webb Community Events across Arizona and enter to win cool prizes! Learn more about the Passport to the stars and your chance to win!

We invite you to get to know Webb and share in the excitement through Webb Community Events across the state of Arizona. To recognize your space-tacular efforts and encourage you to learn more about Webb, we are offering prizes for travelers* who participate in at least 3 Webb events between now and Nov 30, 2021.

Passport to the Stars

Attend any 3 eligible events and submit your completed passport to win prizes. 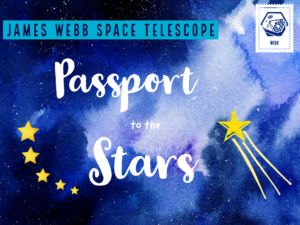 Submit by 11/30/21
Win a special Webb poster and a NASA mystery prize.

Submit by 11/10/21
Win a special Webb poster and a NASA mystery prize.
AND Receive a special invitation to attend a VIP ONLY virtual “Ask Me Anything About Webb” session with early career scientists from the ASU School of Earth and Space Exploration.

Are you a Webb superfan?

We are offering a full-color Webb poster printed on aluminum to the traveler who attends the greatest number of Webb Community Events across Arizona.

Here’s how it works:

1. Attend an eligible event either virtually or in-person.
2. Scan the QR code for that event with a smartphone camera.
3. Record the code word along with the name and date of the event in your passport.
4. When you’ve attended at least 3 eligible events, scan the QR code on the back of the passport and complete the form with your code words.
5. We’ll mail your prizes to you.

Prizes will only be mailed to U.S. addresses.
*This opportunity is open to travelers in grades K-12

Across the nation, 500 event hosts have been selected to connect you with the cutting edge science of Webb. We’ve compiled a calendar of events hosted across Arizona from 15 of these selected hosts. Now you can join the adventure and wonder of Webb at a community event site or a computer near you. Hover or click on any event to learn more or use the buttons at the top to filter the list of events. If you are a K-12 student, don’t forget to check out the Passport to the Stars!